The “Split Identity” pack consists of two parts. Firstly, Loops contains a folder of 17 Nostalgic Loops in Synthwave and Retrowave style, 13 Chiptune loops inspired by early Gameboy / Sega Genesis game music, and future bass, 10 Dark loops made in the Dark Trap and Dark Ambient style. In addition,  it includes 10 more quality loops that didn’t fit into the other categories. Secondly, the one-shots are composed of 50 synth hits ranging from nostalgic pads and pluck to experimental bass sounds and ambient chimes made ready for any modern DAW sampler, as well as 30 drum and percussive hits, glitch sounds – and FX, the majority of which were designed and shaped purely from scratch.

MVC B is a bedroom producer that has been making multi-genre music since 2014. He works regularly with underground artists, his versatility and unique sound design are among his best assets, having produced genres ranging from Pop, (Including Hyperpop and Bitpop), RnB, Lo-Fi, and Future Bass to Industrial Dark Trap, Synthwave, and Breakcore. Nostalgic sounds and aesthetics found in Retrowave and chiptune are some of the biggest staples in music he produced. 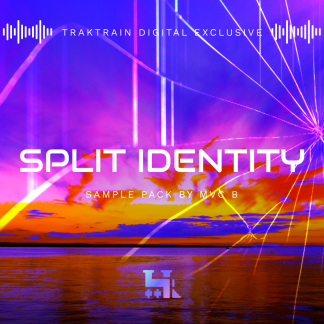 You're viewing: SPLIT IDENTITY Sample Pack by MVC B $20.00
Add to cart